Students learning Japanese in the Short-Term Program enjoyed watching their first time Sumo Wrestling.  Here is the comment from one of the students. 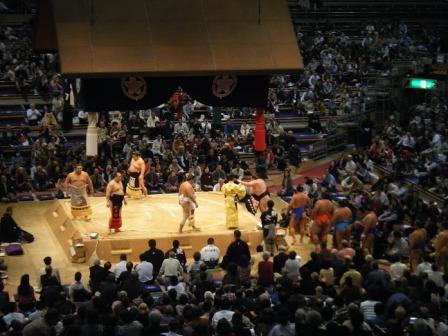 I have never watched Sumo Wrestling LIVE before. This is the first time that I am watching it LIVE… すごいね。。。
In fact, I knew nothing much about Sumo Wrestling, I only knew they were supposed to push the opponent out of the ring or made them fell to the ground in order to win the game.

Prior to the Sumo Wrestling match, Sensei provided some information and briefed us about Sumo Wrestling such as the history, the rules, the levels of a wrestler can attained, the techniques used to overcome the opponent, the prize money, the rituals, the ceremonies, and the etiquette while watching the match, etc…

It is a pity to hear that there are only about 700 wrestlers now.
And, there will be no salary for those wrestlers who belong to the range of Makushita – Jonokuchi. How are they going to survive without a salary!!!!????

In order to have a salary, a wrestler must attain a level within the range of Yokozuna – Juryo.

We reached Fukuoka Kokusai Center around 3 p.m. While we were taking photos, some wrestlers passed by, and we managed to catch a glimpse of them. They are so huge…

We proceeded to our seats, watched the last few rounds of the Juryo grade’s matches, then followed by the Makuuchi grade. The duration of a match was very short and fast, there were a few times the matches ended before me knowing it…
Although I may not know the wrestlers, but it is really exciting to watch the match LIVE and cheering them. The matches ended at 6 p.m. with a ceremony called  Yomitori Shiki.

Although Sumo Wrestling is one the traditional sports of Japan, but to my surprise, I was told that most of the wrestlers are not Japanese, most of them are from Mogolia, hence,  hopefully Japan will look into ways to attract more Japanese to take up this sports and keep it going.

An enjoyable, interesting and exciting event. 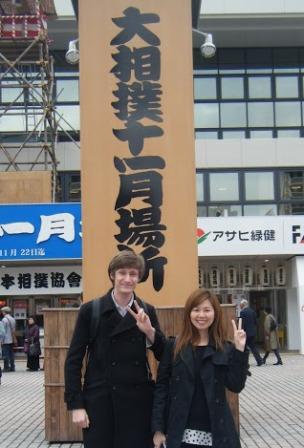