Hojoya Festival is one of the big three festivals in Fukuoka.  It is held in mid-September every year.

“I have been to many Japanese festivals, but I think I liked this one the best. It was big enough to make a whole day there worthwhile, but small enough to not be over whelming. It’s good to know that Fukuoka has its own festivals of this nature. And it was amazing to see people from all over Kyusyu gathered in one spot.

I enjoyed the shrine, and the flower arranging displays, but my favorite part was the food!!

There were so many food stands from all over Kyusyu, and even some Tokyo style treats. Luckily for me, there were foreign food stands as well, so I got to eat some amazing tacos!!  I met a lady at a cheese boll stand that was so impressed with Japanese that she gave me a とくべつ(special) service. The food was truly amazing. Everything was home made. For the tacos, they made the tortillas from scratch, it looked and smelled so good. Before deciding what to eat, I walked through the entire festival, and took notes of what I wanted to try. Cheese balls, chocolate covered bananas, yakisoba, tacos, blended grapefruit, and fried potatoes!! I ate it all. At a lot of stands, if you ordered something you could play rock paper scissors with the owner to win a prize! For dessert we found a stand that sold Turkish ice cream!  It’s very sticky and elastic, and the owner used the stickiness to play sticks on the customers. He had a long metal pole that he used to scoop the ice cream, the stuck the ice cream to the cone, then put the cone in front of the costumer. When they tried to grab it, he would pull it away fast! That ice cream was so delicious. It was the perfect way to end a perfect day.” 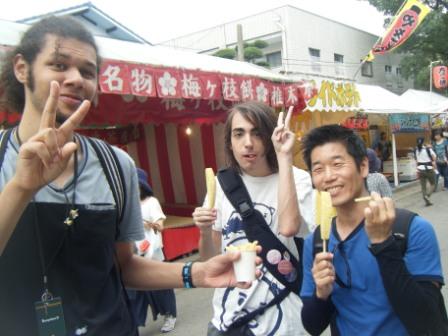 “As this year’s summer starts to wind down, we celebrated the ending of summer at the Hojoya festival.  Hojoya is one of the big three Fukuoka festivals and is held every years from September 12-18 at Hakozaki-gu Shrine.  Hojoya is a Buddhist festival that serves as a reminder to be thankful for our life and the lives around us and be thankful for all the animals and plants that sustain our lives.

As soon as we got out of the station we were able to see many food stalls and souvenir shops and the huge crowd of people.

First, we headed to the shrine for photographs and good lick souvenirs. Also, anyone that wanted to pray for safety and blessings could do so at the shrine.

Next, we headed to the food stalls. There were over 200 stalls selling traditional Japanese food as well as a few western food stalls. I had a slice of pineapple, a fresh grapefruit, a chicken taco, and Turkish ice cream.

I didn’t eat Japanese food at the Hojoya festival because I wanted to try something different and I’ve already eaten a lot of Japanese food in my 3 months here in Fukuoka. The chicken taco was very good, but my hands got messy from eating it. Fortunately, the chicken taco came with a towelette to wipe my hands clean. The vendor selling the Turkish ice cream put on a little performance form everyone buying an ice cream. We wanted his performance and then we each bought an ice cream. The Turkish ice cream vendor’s performance started with him using a long stick to get the ice cream from the container and swirled it around my head on the stick. Very interesting and he didn’t drop the ice cream. Finally, we finished off the night by visiting an air soft gun target game. I did pretty good at the air soft gun game.

I made one of my last memories here at Hojoya before I go back home.”

“The Hojoya festival was a massive gathering of people from all over the Fukuoka province. As we emerged out of the subway we were immediately greeted by an ocean of people coasting along the endless rows of shops. Yakitori and Hello kitty and Yakitori and plastic masks and Yakitori and ice cream and Yakitori and Yakiniku and Yakitori. The shops all lead up to a temple. Upon entering the temple, you wash your hands at the basin with the ladle then wash out your mouth. Inside the temple was many many lined perfectly manicured flower displays. I mean that literally, these flowers where so perfectly artistically displayed that even pictures couldn’t do them justice. Inside the temple courtyard was also a line of Omamori shops(lucky charms), selling charms for good luck, health, money, or protection. The shops in the main strip consisted of many different food stands and some toy or souvenir stands. The food was stuff like Yakitori (the infamous chicken on a stick), Yakiniku (the lesser known beef on a stick), elastic ice cream from Turkey, Tacos ( though these where more like a Japanese style crepe with taco fillings), and shaved ice. Amongst the food stalls there where also toy and souvenir stalls with cute trinkets or inflatable toys to play with. And then there where the game stalls, ranging from fish catching games to gun shooting games. Speaking of games, the food vendors loved to play rock paper scissors, if you won you got a free extra whatever you bought. All in all the festival was an amazing experience and I’d defiantly want to go to another!”