The first trip I went on with the school was a trip to a Yusentei Koen for a tea ceremony.

Apparently, the Kuroda family—one of the strongest samurai families in Japan—own the house and use it as their summer house. I’ve always wanted to go to a traditional Japanese mansion, and I’m so happy I got to go there. 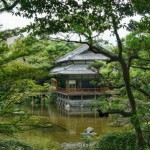 It was so peaceful and beautiful and there were gorgeous green trees everywhere.

Also, there is a pond with colorful koi fish swimming around. Our class was given a packet with little round greenish brown things inside for us to feed to the koi. Some of the koi fish ate directly out of people’s hands! It was super cool to see. Naturally, I wanted to try it myself but the fish wouldn’t swim near me…

That’s okay though, because before the tea ceremony started, I fed a pigeon out of my hand. I had my hand held out with food in it, and I didn’t think the pigeons would actually land in my hand and peck food out of it. I thought they were shy. I guess I was wrong. It was so much fun though! After that, the pigeons kept hopping after us on the trail hoping for more food, but we had none.

The tea ceremony itself was very refreshing and relaxing.

Sipping tea while overlooking the koi pond was such an amazing experience and I’m very happy I got a chance to visit the Yusentei Koen during my trip to Japan. 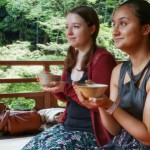 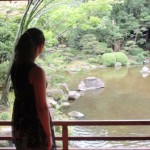