Do you know what we celebrate on Feb. 14? Yes, of course, it’s Valentine’s Day! I would like to tell you a bit about Valentine’s Day’s traditions in Japan. 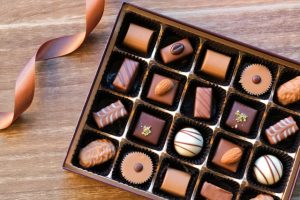 (1) Valentine’s Day
In Japan, women traditionally give men a gift of chocolate and confess their love. You can buy all kinds of chocolate everywhere – department stores, supermarkets, or even convenience stores. 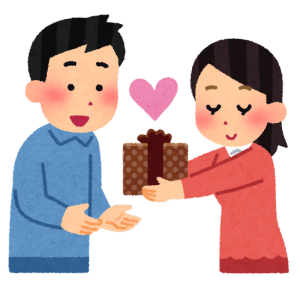 (2) When did the tradition begin?
In 1956. A newspaper advertisement named “Valentine’s Sale” secured the Valentine’s Day’s status in Japan promoted by confectionery and retail businesses. There was no religious element. In those days, however, people purchased gifts of clothing or cosmetics and started the tradition of exchanging gifts among friends and family.

(3) When did Valentine’s Day become so popular?
In late 1950’s. By 1960’s, it became customary for women to give chocolate to men. (There are various theories behind it.)

(4) How do people exchange gifts?
Do you give it to friends, someone you are really interested in, or people you feel obliged to?
As I mentioned earlier, women typically give chocolate to men they are romantically involved with. In these days, however, it’s become common to gift any men, typically male colleagues. That kind of giving is called “Giri choco” (Giri means obligation). Friends also started exchanging chocolate called “Tomo choco” (Tomo means friends). With the spread of this culture, 20% of total annual chocolate sale happens on February 14th.

(5) What is White Day?
This falls on March 14th. In appreciation of the gift of chocolate, men give cookies, marshmallows, candies, etc. to women.

I would love to know what you do on Valentine’s Day in your country. What do you give to whom, if at all?

Also, please take a look at the variety of chocolate products in stores. It’s a lot of fun just to look at the display.